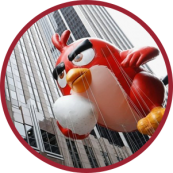 Angry Birds maker Rovio Entertainment is on the hunt. Not for more pigs the irritated fowl can target. A new report says that Rovio wants to go public, looking for $400 million with a $2 billion valuation.

Nothing wrong with that if you're at Rovio and looking for cash to expand. But that will take more than money. It will take the next big gaming concept, and even that isn't enough for Rovio to become the next Disney. The company has been stuck. Previous attempts to break out of the one-hit-wonder category still left Rovio known for Angry Birds only.

Please don't misunderstand me. When you can make hundreds of millions on a single concept, it's an accomplishment. I and many other independent creative colleagues of mine should be so lucky.

Even the word luck isn't exactly right. Rovio had tried and failed with 51 titles over six years before it hit upon Angry Birds, fame, and fortune. They worked hard and found something that hit big. It's not a big wonder why Rovio plans to go public, according to Bloomberg.

But a business that depends on popular culture and taste will find planning a strategic future to be a challenge. History shows how fickle gaming and popular entertainment in general can be. Businesses base success on satisfying customers. You build the better mousetrap, create an online service a billion or more consumers hadn't realized they wanted in order to connect with family and friends, or find another way to scratch someone's itch.

In the entertainment industry, what's in one day can be out the next. Continued success depends on the delicate task of stringing consumers along. You can do it with variety and diversity--and a share of luck. Marvel, for example, has always developed new comics titles over the years (variety) and successfully moved into movies (diversity) when Disney bought it for $4 billion in 2009. Now the division is on cable TV and working with Netflix. But even Marvel can have problems, as the recent Spider-Man franchise reboot attempt showed.

For mobile gaming companies, shifts are even more difficult. Zynga did well at first with its grip on Facebook users. But look at its quarterly revenue and profit numbers since going public in 2010.

Zynga had more than one hot title but hasn't successfully moved into other media in a big way. Revenues are off the historic high by about 40 percent and losses have largely been the quarterly story to investors. From a high of $14.69 per share, stock prices are now well under $4.

King Digital went public and rode a growing wave to 2014 net income of $574 million, or 25 percent of its $2.3 billion revenue. Then Activision acquired the company for $5.9 billion. A neat exit.

Rovio isn't at that level. Back in February, the company announced that it has "returned to profitable growth" after a "record performance" in the gaming division and "a blockbuster release" of a movie based on Angry Birds, which received iffy reviews from critics and audiences, according to the site Rotten Tomatoes.

Although private companies needn't release financial details ever, let alone on a regular basis, a return to profitable growth suggests that performance has been up and down. Maybe things will take off for Rovio, with the money from an IPO helping fuel new development. Maybe not. It's chancy, and might be one of those cases where investors want to sit back and wait for a bit.