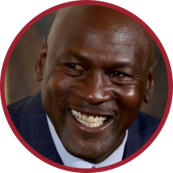 On Nov. 22, President Obama recognized Michael Jordan and a distinguished group of others with the Medal of Freedom award. Also included in the group of 21 honorees were Bruce Springsteen, Tom Hanks, Bill and Melinda Gates, Robert De Niro and Vin Scully. The Medal of Freedom is the highest civilian honor a President can bestow.

In recognizing Jordan, President Obama used a phrase I’ve often heard uttered for nearly three decades, "The Michael Jordan of ____". It's a simple way of describing someone who is the best of the best. How does one become the Michael Jordan of their chosen field? Here are three ways:

1. Be a ferocious competitor.

The stories of Jordan's competitiveness are now legendary to die-hard sports and Chicago Bulls fans. Sportswriter Wright Thompson, said of Jordan, "There's no way to measure these things, but there's a strong case to be made that Jordan is the most intense competitor on the planet." Whether it was basketball, golf or the video game, Bejeweled, Jordan had a beyond normal appetite for competition and winning. As with most things, extremism can be dangerous and should be approached with caution. Still, it must be said that a competitive streak, channeled properly, is necessary to achieve at the highest levels.

To put Jordan's competitiveness into perspective, once after losing at golf to Olympic Dream Team coach Chuck Daly, Jordan persisted relentlessly for a rematch. As reported by Rick Reilly of Sports Illustrated, "The next morning, at the crack of dawn, Jordan rang Daly's room. Getting no response, he went directly to Daly's room and knocked. Then he pounded. He wouldn't go away until he got his rematch. He got it, and he won by a stroke. But would you expect anything else?" While it can be debated that this behavior is obsessive, the takeaway here is that Jordan's competitive streak fuels the ultimate will to never quit or give in. There is no, "I lost to a better player" in him. His need to have a rematch immediately signifies that he can never be permanently defeated; he will always get up off the mat from a knockdown. Everyone can learn from that aspect of competitiveness.

Much of life isn't dictated by what happens to us but by how we respond. To one person, "You can't do it" is seen as a prediction. To another, it's a dare, driving them to do it even more. Michael Jordan famously was cut from the Laney High School basketball team in Wilmington, N.C., as a freshman. Jordan had the ability to use rejection or any perceived slight towards him as a motivator, not a deterrent.

While some people can simply ignore the naysayers, Jordan instead seemed able to convert their words into fuel. This approach requires a uniquely simultaneous combination of vengeance-minded mental toughness with whole-hearted self-confidence and optimism.

To be elite at anything, you need to possess talent, natural ability and good teachers. Unquestionably, Jordan didn't lack in any of these categories: exceptional athlete exposed to multiple Hall of Fame coaches as a young player and a professional. However every year, there are many elite athletes that come from blue chip programs who not only fail to become all-stars, but also fail to make it in the league at all. What separated Jordan? It was his drive to not only be the best, but his willingness to put in the work. In the book, Relentless, by Tim Grover (Jordan's former trainer), he says of Jordan, "After every game, I used to ask Michael one question: Five, six or seven? As in, what time are we hitting the gym tomorrow morning?"

A willingness to pay the price isn't something that is restricted to the genetically gifted or those born with genius level IQs; it’s something that can be earned through discipline. What separated Jordan from the pack was his other-worldly ability to focus on what he wanted and the discipline to see it through. Says Grover, "Most people can't begin to comprehend the psychological makeup of an individual who is one of the the best in the world at what he does, and what he's been through to get there."

Not everyone is looking to be the Michael Jordan of their chosen profession and that's ok. However, it doesn’t diminish the fact that a lot can be learned and gained from those who do set the bar high. Focus on channeling your competitive fire, learn to process rejection productively, put in the hard work and anything is possible.