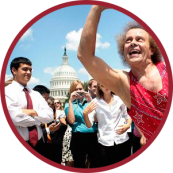 
Maybe he's tired of being "missing" after all.

Richard Simmons, the once uber-flamboyant, now-reclusive fitness maven, has signed a new deal with a company that will handle his licensing, merchandising and endorsements, and launch a line of "motivation" and "inspiration" products.

The deal with Prominent Brand + Talent, whose executives include Simmons' longtime manager Michael Catalano, was reported Wednesday by the trade site License Global.

The news comes less than three weeks after the release of the final episode of the highly popular podcast "Missing Richard Simmons."

That podcast detailed how Simmons abruptly disappeared from the public eye and cut off of contact with his many friends without any explanation in 2014.

Catalano told CNBC on Wednesday that the new deal came about partly because of "the podcast" and a recent People magazine article on Simmons, which "created an outpouring of interest" in the celebrity.

"And a lot of that has been in the the licensing group area," Catalano said.

Asked if Simmons, who no longer does public appearances, will promote his existing products and new products in connection with the deal, Catalano said, "I don't know about promoting, but he certainly will be involved in the creation and the direction of the product, that's for sure."

"Richard really hasn't decided what, if anything, he's going to do to promote it in a public way. So it's really undetermined, at this point," Catalano said.

Simmons' withdrawal was particularly puzzling because for decades before he was known for his over-the-top, emotional television appearances, public events and private encouragement of people who were trying to lose weight. Simmons even had made a habit of dashing out to greet gawkers on tour buses passing by his Los Angeles home.

The six-episode podcast debuted a year after a Daily News story detailed how Simmons' closest friends had become "increasingly concerned" about him after he ceased communications with them, and stopped leading a weekly exercise class at his Beverly Hills studio, Slimmons. There was even speculation that Simmons was being held against his will or being controlled by his longtime housekeeper.

Both the story and the podcast had sparked welfare checks on Simmons by Los Angeles Police, who reported that he was "fine."

After the News article ran in 2016, Simmons did a phone interview with NBC's "TODAY" show, and said, "no one is holding me hostage," and dismissed as "very silly" the theories about his housekeeper.

"I just sort of wanted to be a little bit of a loner for a while," Simmons told "TODAY" at the time.

License Global, in its story Wednesday, reported that Prominent Brand + Talent "will now aim to create a collection of Richard Simmons–inspired products and build on the fitness icon's current lineup merchandise."

The story also noted that Simmons-related merchandise has sold more than $1.5 billion over the years through retailers that include Wal-Mart, Payless, QVC and Amazon.

Catalano told CNBC that Simmons had done 20 different infomercials over the years, and said that was an indication of Simmons' marketing power given the fact that if a product doesn't sell after an infomercial airs, the show is yanked.

Dan Levin, a managing member of Prominent Brand + Talent, was quoted in the License Global story as saying the company "has plans to launch a global line of thoughtful motivation and inspiration-based products that that will achieve the tenet Richard has always espoused — love yourself no matter what you weigh, make time to do good for others and laugh a little."

Catalano told CNBC that no decision has been made yet as to what those new products will be.

"It will all be in keeping with Richard's messaging. ... Richard's always been about helping people feel better about themselves," Catalano said. "We're certainly not going to do tires and party hats. We really want it to be meaningful."

In the last episode of "Missing Richard Simmons," Catalano told the podcast host Dan Taberski that Simmons did not want a "last bow."

"Most people want that last bow, not everybody," Catalano said on that episode, where he also asked Taberski and others "to please respect" Simmons' desire for privacy.

"He's earned it, this is his story," Catalano told Taberski. "He has, certainly, the right to write the ending."

On Wednesday, CNBC asked Catalano if Simmons would call a reporter to discuss his new licensing deal.

"He's not talking to anybody right now," Catalano said. "But I appreciate you asking."