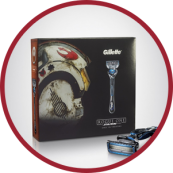 How Star Wars' 5 Biggest Brand Partners Activated Around Rogue One

For the second time in as many years, a new Star Wars movie is hitting theaters. This time it's Rogue One: A Star Wars Story, which is striving for a more awkward title than even the prequel trilogy accomplished. The movie's story is … well … it's basically the one told in the opening crawl of the original Star Wars, the one we all started calling Episode IV or "A New Hope" just in the last 15 years or so.

Felicity Jones plays Jyn Erso, the daughter of the man who helped design the Death Star, the technical terror that's part of the Empire's master plan to solidify its rule over countless planets. Jyn is a bit of a hellraiser who's recruited by the Rebel Alliance to help steal the plans for the ultimate weapon in the universe. So, she and a ragtag bunch of Rebels go undercover to try to uncover the space station's weak spots.

The movie has received a big campaign, with a handful of trailers and plenty of TV spots that show Jyn and her multicultural crew, as well as Ben Mendelsohn as Orsen Kerrick, the Imperial officer they're hoping to foil—and a few hints at involvement by Darth Vader himself. There have also been significant efforts from a core group of five companies who signed on as promotional partners and who have used the movie as a springboard for their own efforts. Let's take a look at what they've been doing:

The battery company continued a relationship with the Star Wars franchise that dates back to at least last year's campaign for The Force Awakens. Co-branded TV spots formed the central focus of the promotional effort, spots that show how Duracell powers the Star Wars toys that light up kids' imaginations.

In this case, those were the imaginations of patients in a children's hospital, who are shown running around and sneaking past nurses to deliver a toy to a girl in bed, and no, I'm not crying shut up. That spot was also used in ads on Twitter in particular.

When you have a car coming out that's called the Rogue, it only makes sense to partner with a movie titled Rogue One, right? The campaign from the carmaker included co-branded spots that put the Nissan Rogue in the middle of some of the movie's Private Ryan-esque battle sequences, though it's actually just a simulation on a testing facility.

Local versions of the ad ran, too, along with a sweepstakes to win a trip to the opening night screening in Los Angeles. There was also a philanthropic angle, with spots promoting how Nissan is partnering with the Force for Change initiative to give Star Wars toys to Toys for Tots.

"Every story has a face" is the theme of the promotional campaign from the razor company. That campaign has included co-branded packaging of a shaving kit set that had one of a few images of Rogue One characters on it, to try to get your attention in the aisles of Target.

There was also a "Gillette Original" short film/TV spot that started off with Rebel and Imperial forces facing off only to run in reverse and show one Rebel soldier in particular making himself pretty before the fight. As with Duracell, this was used for paid posts on Twitter as well.

While there doesn't appear to have been much paid advertising around this, Lucasfilm and Industrial Light & Magic worked with the wireless carrier on Rogue One: Recon, an in-store VR experience that took you inside the cockpit of a Rebel X-Wing.

The story leads right into Rogue One, with the pilot and his wingman investigating what seems to be innocuous comms chatter only to find themselves in the middle of the Imperial fleet and face to face with the in-construction Death Star, setting the stage for the quest for the space station's plans.

Co-branded packages of General Mills cereal (Cookie Crisp, Honey Nut Cheerios and others) as well as bags of Chex Mix featured a promotion that offered a free ticket to see Rogue One in theaters with receipts validating qualifying purchases.

Not the biggest or most innovative of the bunch, but it did feature a TV spot showing grown adults making Star Wars sound effect noises in a grocery store check-out aisle, so it certainly knew the target demographic.


This is not all, of course. But those were the big five companies that signed on for wide-ranging promotional support, hoping to get some of that Star Wars halo effect on their own brand names. While there's some speculation about how a "non-saga" Star Wars movie can do at the box office, there's no lack of brands that are more than happy to draft off the franchise's reputation while hoping to raise awareness—and sales—of their own products.