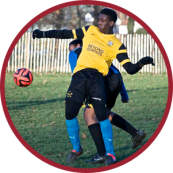 The London Football Teams Where The Fans Really Matter

Grammar school old boys (Tottenham Hotspur), a local Sunday school (Fulham) and the obvious munitions works; the great footballing sides of London grew out of the capital’s communities. But as ticket prices continue to rise, and the Premier League experience continues to be crafted into a mixture of sports tourism and corporate hospitality, some fans are turning their back and looking for a more involved experience.

“Don’t use the H word,” pleads Duncan Hart, chair of the Dulwich Hamlet Supporters' Trust (that's 'Hipster', not 'Hamlet', by the way). Dulwich fans are well aware of their reputation formed by an increasing number of column inches devoted to the number of beards and craft ales on display at their Champion Hill ground.

Described as left, liberal, “right-on” and politically correct, Dulwich fans shirk from such labels. As one member of the Rabble put it; “just be decent, don’t be an ****hole”, is their outlook on life.

The Rabble, Dulwich’s vocal fans, stand behind the goal and singing a range of original chants set largely to 80’s pop fare such as Gangsters by The Specials and Depeche Mode’s Just Can’t Get Enough.

Champion Hill includes a reasonably sized all-seater stand featuring a clubhouse bar which is open before, during and after the game, but fans aren't stuck to an assigned seat. The club’s hardcore start the game, beer in hand, standing behind the opposition goalkeeper. At half-time they, like the teams, switch ends and will the ball towards the nearby net.

Fancy a change of view? The freedom to walk the ground and keep warm is another beauty of football at this level. Here at Dulwich, mothers with pushchairs are among those taking advantage.

The club and Supporters' Trust want to make Dulwich a friendly environment for all, and have taken active steps such as moderating the language in their songs. With average crowds twice that of their nearest league rival, and attendance sometimes breaking the 2,000 mark, it seems to be working.

Five-time winners of the FA Amateur Cup, recognised as the first team to play in Europe and with notable former players including Benjamin Odeje, the first black footballer to appear for England at any level, Clapton FC are often mentioned in the same breath as Dulwich.

Clapton play a lower level of football, but one advantage of the ninth-tier Essex Senior League is that more often than not, you’ll be treated to a local derby and can easily follow your side to away games in Redbridge, Barking, Ilford and Tower Hamlets.

But the atmosphere at the ill-kept Old Spotted Dog Ground in Forest Gate, behind the now shuttered historic pub that gives the ground its namem is decidedly different from Champion Hill.

You won’t find any craft ales here, not that you’d meet many of the Clapton Ultras in the club bar. In dispute with the current ownership, fans choose to stock up with tins of Polish beer and the odd bottle of Italian wine at the corner shop opposite before entering the ground. Regular food bank collections organised by the Ultras mean the shop also does a good Saturday trade on tinned goods.

Once in the ground, the frenzied atmosphere of non-stop chants, flag-waving and flares from fans crammed a dozen deep into the aptly nicknamed ‘Scaffold’ is reminiscent of a more European-style following. These ‘Ultras’ often claim overtly political views and the Clapton FC Ultras alternately style themselves as the East London Antifa (anti-fascists).

The Clapton Supporters Action Fund wants to reconnect the club to the community and see ‘TheTons’ become a fan owned trust. If you’ve dreamed of being part owner of your very own football team, London provides a number of options beyond the well-known AFC Wimbledon.

Rising as a phoenix club from the ashes of bankrupt Fisher Athletic, Fisher FC played at Dulwich’s Champion Hill. In 2016, they and their monotone fighting fish logo returned to Rotherhithe and reclaimed their arguable position as London’s most central club. Learning from their days in East Dulwich, they’ve brought with them food bank collections, local craft ale and cut price community outreach days.

Also sharing the Mayfield Stadium are a phoenix club providing fans with a unique mix of history and social conscience. In 1872, The Wanderers beat Royal Engineers in the inaugural FA Cup final and claimed the trophy four more times before folding in the late 1880s. Reformed in 2009, the amateur side’s development squad runs in partnership with Football Beyond Borders, an education charity and Dulwich Hamlet FC’s charity of the year.

It's also worth pointing out that the sole remaining founder of the Football Association to still be playing the game is the strictly amateur Chiswick based Civil Service FC. The club is one of two founder members of the FA and Rugby Football Union. The other, Blackheath FC has been around since 1858. You can drink beer as you walk round their Well Hall pitch in Eltham, but despite the FC moniker Blackheath now only play rugby.